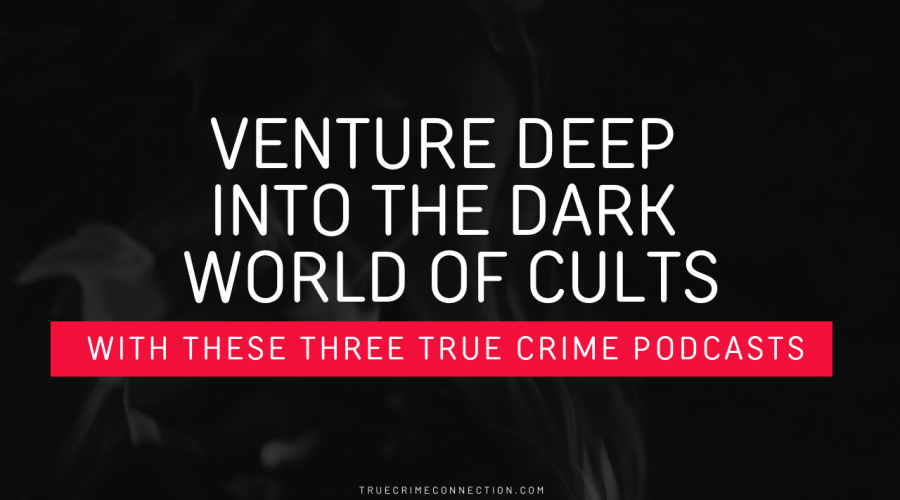 In pop culture, it’s easy to label things as having a cult following–from celebrity YouTubers to iconic cosmetic brands, the word “cult” is often used to describe a somewhat quirky group of people who follow a certain brand or celebrity with almost idolatrous dedication.

But when it comes to true crime, cults take on a different meaning altogether–one of sinister leaders, alien worship, violence, and creepy suicide pacts.

Do you find the true stories of cults fascinating? You’re about to be stunned by these true crime podcasts, that truly take you inside their world in a way you’ve never experienced before. Weaving incredible stories of the most famous cults, whose stories you might think you already know, they give understanding to what it might have been like to believe–to believe so much that one was willing to die for that belief.

But be warned–these deep dives are not for the faint of heart.

Looking for a true crime podcast all about cults? From Heaven’s Gate to Charles Manson, we’re counting down our top picks for podcasts that deep dive into history’s most infamous cults.

If any cult leader has defined the stereotype of what it means to “drink the kool-aid” then it is Jim Jones. The charismatic leader arrived like a pied piper, leading his followers down a deadly path that would end with the mass murder-suicide of over 900 people at the People’s Temple Agricultural complex in south Guyana.

“If we can’t live in peace then let’s die in peace,” he proclaimed.

The story has been told so many times that you might think you know everything there is to know about it–until you listen to Transmissions from Jonestown. This true crime podcast uses real recordings to understand better the beliefs of Jim Jones’ followers. By the time you are finished, you will understand why even survivors of Jonestown say it is far too easy to say those who chose to die that day were simply brainwashed. There is more to the story, and Jones’ followers left that story for you to hear–Transmissions from Jonestown tells it.

You Must Remember This: Manson

Karina Longworth’s velvety voice weaves stories of Classic Hollywood, but she is perhaps at her best when she is telling a spooky story. In her popular true-crime retrospective, Charle’s Manson’s Hollywood, Karina Longworth takes you back to the beginning of Manson’s life. She masterfully traces the incredibly intricate path that would lead to the murders of five people on the evening of August 9, 1969.

By the time you get to that fateful day on Cielo Drive, you understand how Manson had achieved enough power to command his devotees, Tex Watson, Susan Atkins, and Patricia Krenwinkel to commit the atrocities–without him even having to be there himself.

When the news of a San Diego mansion filled with the shroud-covered bodies of 39 adherents to the teachings of Marshall Applewhite, jaws around the world just about dropped to the floor. The story has been re-told again and again, to the point that Marshall Applewhite is a veritable icon of cult leaders. Heaven’s Gate Podcast  takes the story from a different angle, however–it distills all the recordings and the teachings, as well as the audio and video journals of the people who lived these stories to a fine point. Seeing the story through their eyes, right up to the time they perished, you might understand what it might have been like to believe in Marshall Applewhite’s dream–no matter how deadly it might end for you.

They say that in cults the person at the top always knows its all a big scam–well with these true crime podcasts about cults, you will understand why cults operate the way they do and have a better understanding of how anyone can become a victim of their methodologies.

Suddenly what once seems so strange, becomes a frightening warning for something incredibly familiar.

So the next time you hear a knock at the door inviting you to partake of some mysterious ingredient in a darkened basement where a charismatic leader beckons you to chant to alien warlords from another planet–you’ll know why it is probably best to stay clear.

Speaking of cults, do you consider yourself a member of the Tiger King cult of fans? Try these rue crime podcasts about other stranger-than-fiction characters next.